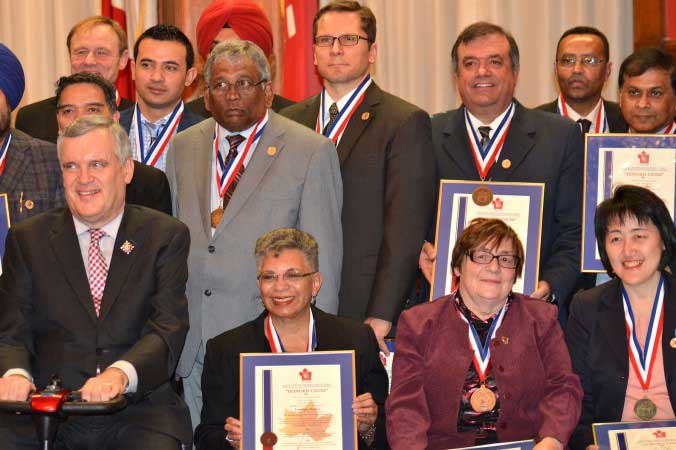 A series of magazines published by the Toronto edition of the Chinese Epoch Times has received an award for outstanding design and editorial content.

At a ceremony on Nov. 15 (2013), the National Ethnic Press and Media Council of Canada (NEPMCC) awarded the series for “Best Editorial and Visual Presentation.”

The winning series, which is geared toward Chinese Canadians, includes travel and education magazines and a summer camp guide.

“Today we honour these magazines for their fine editorials and visual presentation, and for their efforts to promote the natural beauty of Canada to new immigrants from China,” a description of the award reads.

“The philosophy of the publishers of the magazines is to promote citizenship, integration and to improve the quality of life of the members of Chinese Canadian Communities.”

Thomas Saras, president of the NEPMCC, said the magazines are leaders in both artistic and editorial concept.

“This is the best magazine I have ever seen among the ethnic communities,” he said at the ceremony.

The council’s members include about 650 publications from 100 different communities and 125 television stations and radio stations. Several other publications, radio stations, journalists, and individuals were also given awards.

Ontario Lieutenant-Governor David C. Onley, at whose office the ceremony was held, noted the importance of the awards.

“In those countries where the individuals come from there is no freedom of the press, no freedom of speech, certainly not as we experience it here in Canada,” he said.

“So it is a great way to make recognition of the contributions that the people made from the different ethnic groups in Ontario and Canada. It is great way to recognize the importance of freedom of the press and freedom of speech—that is why it is one of the most important events that we hold each year.”

Publisher Cindy Gu said there are plans to add more publications to the growing list, with seven magazines out by next year.

“We hope to better serve the readers,” she says. “We have a very enthusiastic magazine team, they are very dedicated.”

Chief editor Renee Zheng said the team did not plan to publish so many magazines initially, but after interaction with readers they found they had tapped into an underserved niche market.

Although many Chinese immigrants who come to Canada like to travel and send their children to summer camp, she said, existing Chinese-language publications lacked such information.

“We’re trying to provide information that readers really need, while also providing that experience,” said Zheng. “Many articles in the magazine are a reflection of our team members’ lived experiences.”

Last year, the Chinese edition of The Epoch Times received the NEPMCC award for “Excellence in editorial/free expression, best concept and visual presentation.”

Also last year, Gu was awarded the Queen Elizabeth II Diamond Jubilee Medal by the Canadian Centre for Abuse Awareness for raising awareness of human rights abuses in China, including the illegal harvesting of organs from Falun Gong prisoners of conscience.