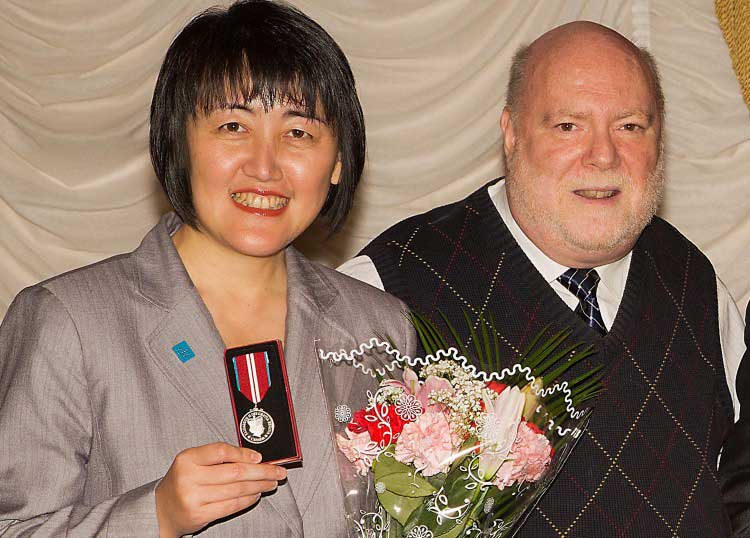 Epoch Times publisher Cindy Gu stands with Sanderson Layng, Vice President and Chief Operating Officer of the Canadian Centre for Abuse Awareness (CCAA), after being awarded the Queen Elizabeth II Diamond Jubilee Medal at a CCAA fundraising event in Toronto on Oct. 11, 2012. Gu's work to raise awareness of human rights abuses in China and the organ harvesting of Falun Gong practitioners prompted the CCAA to nominate her for the award. (Evan Ning/The Epoch Times)

Gu’s work to raise awareness of human rights abuses in China and the organ harvesting of Falun Gong practitioners prompted the CCAA to nominate Gu for the award alongside Joe Wang, president of NTD Television.

The Epoch Times is an award-winning media company that publishes the world’s largest Chinese-language newspaper and news website. Published in 35 countries and 19 languages globally, The Epoch Times prints Chinese, English, and French editions in Canada.

Gu came to Canada from China 20 years ago with $200. After completing a Master’s degree and spending a decade in the corporate world, she joined The Epoch Times in 2003. Within another 10 years, she built a team that turned The Epoch Times into Canada’s top print and online media for mainland Chinese immigrants in Canada.

Gu credited the award to all the staff at the Epoch Times.

“Our team works hard to put out a newspaper of the highest quality, something our readers have come to rely on for insights about China and the world that they can’t get anywhere else,” said Gu.

“The Epoch Times has done extensive and often exclusive coverage on human rights abuse and torture around the world, particularly what’s happening in China. Our coverage on the large scale organ harvesting from living Falun Gong practitioners in China has resulted world-wide media coverage and attention on this issue and resulted in more scrutiny of the organ trade in China.”

The Queen Elizabeth II Diamond Jubilee Medal was created to mark the celebrations in 2012 of the 60th anniversary of the Queen’s accession to the throne. The medal is awarded by Canada’s Governor General to honour significant contributions and achievements by Canadians.

Sanderson Layng, the Vice President and Chief Operating Officer of the CCAA, said Gu and Wang were two of the most deserving people he knew to receive the Diamond Jubilee.

“I think through their respective efforts with NTD and The Epoch Times, they both exemplify the kind of service to our country that will help change our country for the better,” said Layng.

Since its founding, The Epoch Times has broken several stories through its unprecedented access to on-the-ground and well-placed sources in mainland China, including the outbreak of SARS in 2004 when it was still being officially denied by authorities.