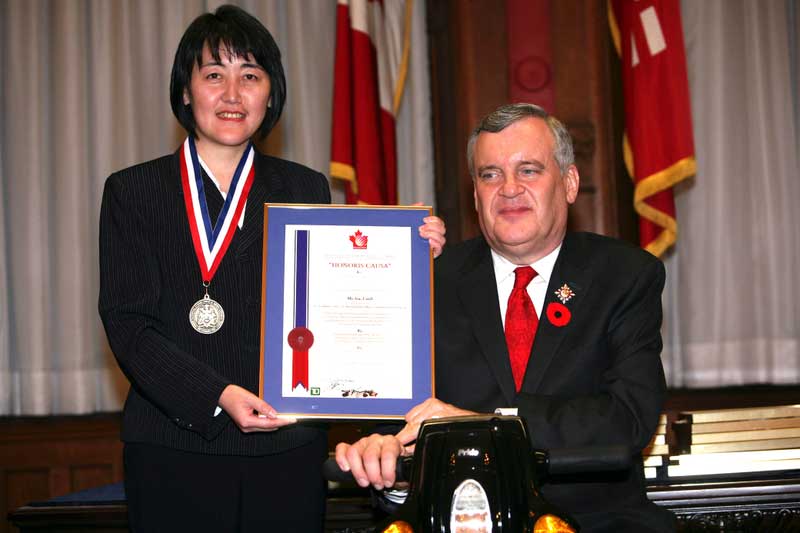 The Chinese edition of The Epoch Times has received the National Ethnic Press and Media Council of Canada award for “Excellence in editorial/free expression, best concept and visual presentation.”

Cindy Gu, publisher of the paper, accepted the award from Ontario Lieutenant Governor David Onley on behalf of what she described as an “excellent team of reporters, editors, photographers and designers” at an event Nov. 9 at Queen’s Park.

Gu said The Epoch Times has come a long way since it first began as a weekly tabloid in 2000. Since then, the paper has grown into Canada’s largest Chinese broadsheet and the only daily Chinese newspaper with an audited circulation.

The newspaper’s growth includes the addition of English and French editions and expansion across the country to Canada’s six largest cities.

It is the second time The Epoch Times has won the award. In 2005, the paper won for its coverage of SARS. It was the first newspaper to report on SARS while official Chinese channels still denied the existence of the disease.

Thomas Saras, president of the National Ethnic Press and Media Council, lauded The Epoch Times’ efforts to bridge the cultural divide between Chinese newcomers and mainstream Canadian society while reporting on ongoing problems in China.

“The Epoch Times are real good fighters. They bring many, many stories about what is happening in China with issues like organ harvesting and the killing of people for their organs. [The award] shows that it is a paper well respected in the community, by the community, and it is working for the benefits of the human family,” Saras said.

Once considered relatively insignificant, Canada’s ethnic press has grown in stature as its ethnic communities have grown.

Immigration Minister Jason Kenney is credited in part with delivering to the Conservatives suburban ridings with large ethnic communities during the last federal election. The Canadian Press received documents through access to information requests that show his department spent $745,000 from March 2009 through May 2012 to gauge perceptions of his department in the ethnic press.

Looking to the future, Saras said it isn’t hard to project that ethnic press will be increasingly influential and likely to be viewed as mainstream media.

“The Ethnic media at this point is thriving. According to Statistics Canada data released last month, 6.4 million Canadians are communicating at home in their mother tongue, in a language that is not English or French,” he said.

“That means 6.4 million Canadians are relying on the ethnic media to get their news from either Canada or their old country. So under those circumstances I believe the ethnic media has a very good chance to prosper.”

“The members of these communities get their stories from the ethnic media, and one that has done well is The Epoch Times. It is a very good example.”

He predicted that media now considered ethnic would be mainstream outlets within 20 years, playing a critical role for newcomers integrating into Canadian society.

Bridge to the West

Saras said one distinguishing quality of The Epoch Times was its effort to report mainstream news, helping newcomers better understand their adopted country while simultaneously keeping up with issues in China.

Too often now, he said, many Chinese newcomers remain locked into the Chinese community with little interaction with mainstream Canadian society.

“To the credit of The Epoch Times, it got out of that block and created a newspaper that goes everywhere in Toronto—not only areas of Chinese people, but also mainstream events. And the anglophone edition goes everywhere. This is the right policy to bring the problems of the Chinese community to other committees, and at same time report what happens with government to the Chinese community,” Saras said.

“[The English and Chinese editions] are the main bridge between the new culture and the old country. These people who are coming to Canada—they have very little idea of the Canadian culture.”

Gu noted that the English edition also provides a bridge for second-generation Chinese to connect with their culture by carrying stories about the mainland and the essence of traditional Chinese culture.

Earlier this year, upheaval in the Chinese Communist Party became the biggest story in China and The Epoch Times staked its claim on the story with inside sources and coverage that predicted major events, including the downfall of Bo Xilai, once the Chinese regimes commerce minister before being demoted and eventually purged.

That coverage saw visits to The Epoch Times Chinese website increase from 1 million per day to 6 million.

Such coverage is part of why Chinese community leaders attending the award ceremony said they make reading Epoch a regular habit.

Hong Shizhong, chairman of the Chinese Benevolent Association of Greater Toronto, said he and his wife read the paper every day because they believe that “you can really see the real situation in China in Epoch Times.”

Hong Kong and Canadian Alliance chairman Li Shude said he reads the paper two or three times a week, but more often if there is big news.

Political commentator Li Tianming reads the website daily for news covering politics, human rights, the economy, and more, he said. He praised The Epoch Times for holding the Chinese regime to account for its numerous abuses of the Chinese people.

“They are very brave to stand up,” he said. “This award is well-deserved.”