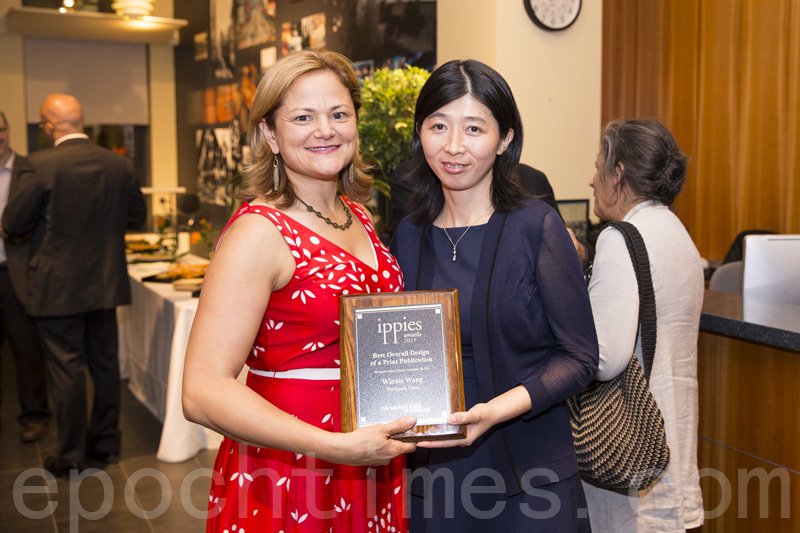 The Chinese-language edition of Epoch Times in New York City won the top design award for its print publication on June 11 (2015), at an event held by the City University of New York Graduate School of Journalism.

The Ippies Awards, the only awards given to community and ethnic media outlets in the New York metropolitan area, are now presented annually by the Center for Community and Ethnic Media. In the years past, the awards were handed out by the Independent Press Association of New York.

This year there were more than 200 entries, the most so far recorded. It was also the first year that the Chinese-language Epoch Times has been honored with an Ippies award.

“The cover is bold and eye catching with a clear graphic. The publication has excellent use of white space and subtle but effective use of color,” said Dr. Andrew Mendelson, the chief judge of the category “Best Overall Design of a Print Publication.” Mendelson is chair of the Department of Journalism at Temple University and associate dean at CUNY.

“The whole issue floats beautifully with informative photos and infographics. Advertising is clearly delineated from editorial,” he added.

The award-winning entry was the front page of the Chinese-language Epoch Times on Nov. 18, 2014; the piece explores plans to replace New York’s aging payphone booths with a system called LinkNYC, touchscreen kiosks that provide free Wi-Fi.

“My original design guideline was to use high-resolution pictures and colorful icons to describe the functions of LinkNYC,” said Winnie Wang, senior graphic designer of the Chinese-language Epoch Times, who was architect behind the award-winning front-page entry. “I want readers to remember it without reading the text. This can better serve our Chinese readers.”

Wang said she didn’t start her career as a graphic designer, and has only been doing it for three years. The principle she credits with winning the award is “less is more.” “The function of newspapers is to pass on information,” Wang said. “So, my own idea is ‘simple is better.’”