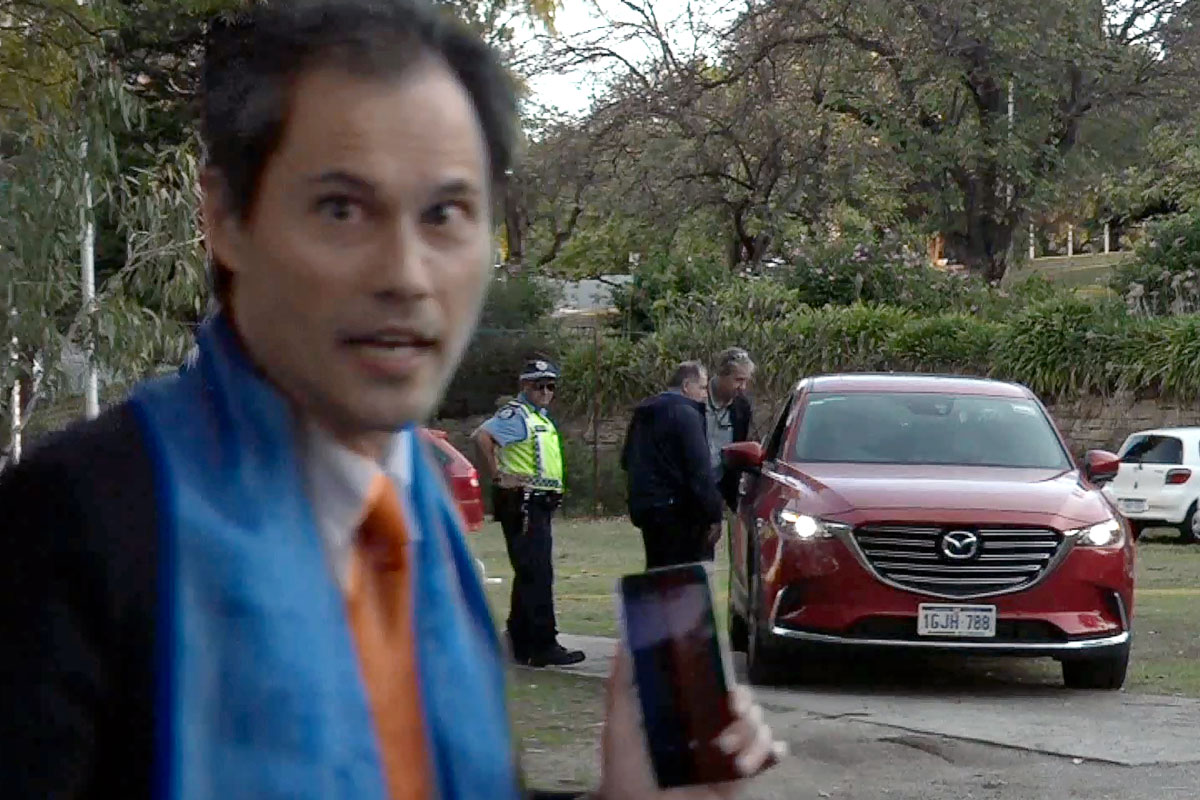 Chinese Communist Party (CCP) diplomats in Perth were caught red handed covertly filming a “June 4th” rally commemorating the 31st Anniversary of the Tiananmen Square Massacre on June 4. They were spotted and videotaped by the event organisers.

The rally held in front of Parliament House was the first public commemorative event for “June 4th” in Perth in past decades although similar rallies and protests have been commonly seen around the world. A newly founded organisation named Perth Anti-CCP Association planned the rally.

The event co-organiser Tshung Chang spotted three CCP officials from the Chinese General Consulate in Perth monitoring and filming the event from the sideline. Later he identified two as Chinese consular officials Bin Xu and He Yifan.

The CCP officials fled the scene once they were spotted. Chang and his colleague gave chase and chased the three down to a car park that was on top of a hill around half a kilometer away.

According to the live footage filmed by Chang’s colleague, the CCP officials were driving away when Chang arrived there, but then they refused to leave until six local police officers came to the parking lot about 5 minutes later.

Chang learned from one police officer that the police declined the demand by the Chinese officials to delete Chang’s footage.

The incident was just one of numerous evidences of the CCP engaging in their industrial scale spying and intimidation. Chang, the former Western Australia Secretary of Pauline Hanson’s One Nation Party, believed that it was mainly Chinese citizens and Hong Kong people that were targeted in this case.

“It was a deliberate attempt to find leverage and control of their citizens while abroad”, Chang said, ”In terms of Australian citizens like myself, are they making an assassination list when Western Australia goes down the Victoria route?”

Richard Lue, the main organiser for the rally, strongly condemned the covert filming by the CCP officials. “Their purpose was to make trouble for the event participants and also to create a frightening atmosphere on the free land of Australia.” Lue said.

“I respond to it as follows: The CCP regime has completely lost the legitimacy of authority in China because it shot unarmed students, imprisoned Uyghurs in concentration camps in the 21st century, and violated the Sino-British Joint Declaration about Hong Kong.”

Lue continued, “Our appeal to organise the protest is to overthrow the CCP and bring the culprits responsible for the Tiananmen Square Massacre 31 years ago to justice.”

Hon Charles Smith attended the rally and made a short speech. On June 9 he questioned the leader of the Legislative Council representing the Premier about the incident during question time. He asked four questions including whether the Chinese officials had an appointment at Parliament House and whether their filming is highly inappropriate.

But Smith was totally disappointed with the response which was just one sentence, “Appointments at Parliament House are managed by Parliament House security.” He regarded it “a disgraceful answer showing complete contempt for a Member of The Legislative Council and members of the Chinese community who live in fear of the CCP”.

Chang thought the Australian government should not appease the CCP in such a circumstance.

”The Australian government should be demanding copies of all the photos and video taken as well as demanding a written letter of apology from the Consul to the organisers.” Chang said, “Failing that, these diplomats should be immediately expelled.”